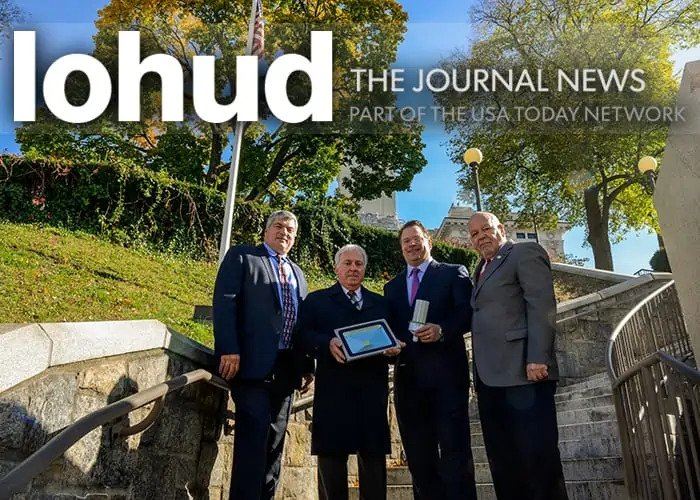 So far Robison and Original Energy have ordered the energy-efficient bulbs and fixtures for Greenburgh, Mount Pleasant, North Salem, Pelham, Yonkers, and Yorktown. Two energy companies are donating efficient light bulbs to local governments so they can save money while honoring veterans. The Robison fuel oil company and its related firm Original Energy are in talks with about 17 Westchester County communities for the free light emitting diode bulbs and fixtures. “We wanted to do it for two primary reasons: to shine the light on the vets and shine the light on our ability to design and install LED lighting,” said David Singer, CEO of Robison.

So far, Robison and Original Energy have ordered the energy-efficient bulbs and fixtures for Greenburgh, Mount Pleasant, North Salem, Pelham, Yonkers, and Yorktown. The installations in Yonkers start this week. Back in April, the companies sent messages to municipal officials throughout Westchester County offering to swap out their old-fashioned lighting. Singer said he got a good response, but he wants more municipalities to change their bulbs.

In Yonkers, Robison and Original Energy are donating lighting for about 40 locations, including police precincts, fire stations, parks, veterans posts, and a school. Thomas Meier, Yonkers’ commissioner of public works, said LED lights generally reduce the city’s energy bill by about 40 percent. “On the mayor’s behalf, I just want to thank Robison for calling us up and taking this initiative to not only save the taxpayers of Yonkers some money but also make sure the monuments and flags in Yonkers are properly illuminated,” said Meier, noting that U.S. code requires that flags displayed overnight be illuminated. For more than two years Yonkers has been on a massive LED bulb conversion.